Women control 85% of all consumer purchases. They (we ?) are the most powerful drivers of the world economy. 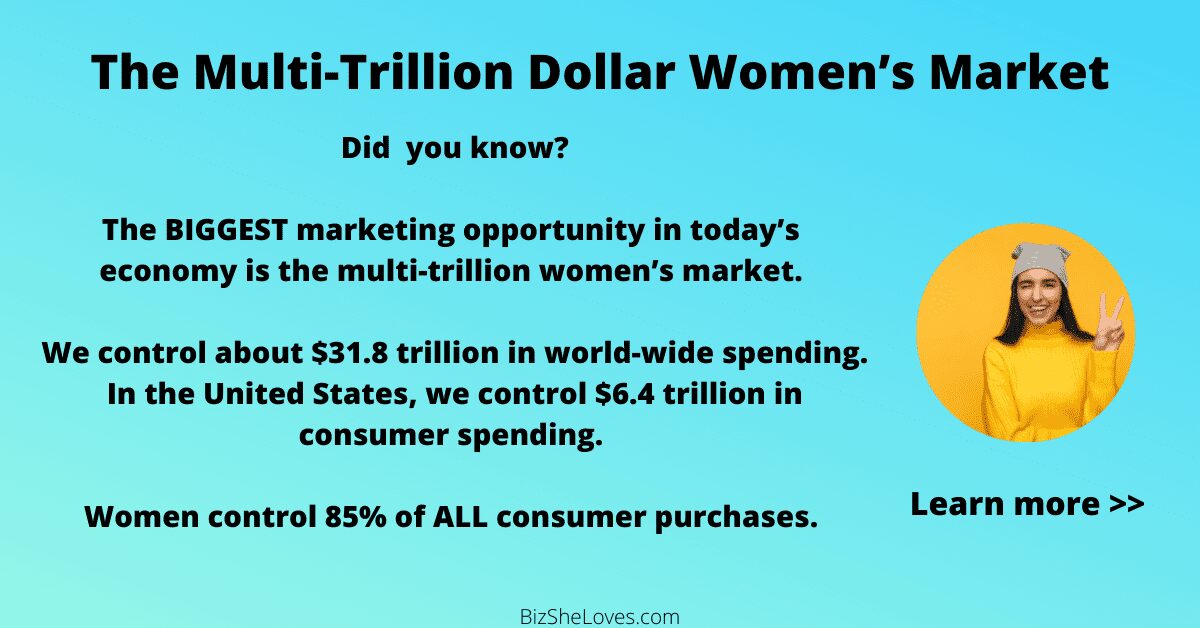 Marketing to women? The BIGGEST marketing opportunity in today’s economy is the multi-trillion women’s market. They control about $31.8 trillion in world-wide spending. In the United States, they control $6.4 trillion in consumer spending. Women control 85% of ALL consumer purchases. For example, they buy more cars, homes, food, computers and electronics as well as insurance and travel services. They make over 80% of healthcare decisions.

This is shocking, but it’s true…

The growth market represented by women is bigger than China and India COMBINED, according to Harvard Business Review: The Female Economy (2009).

Despite their enormous contribution to the economy, it’s usually hard for women to get funding for their businesses.

Women entrepreneurs usually ask for and receive less business financing than men, according to Fundera’s report on the “State of Small Business Lending: Spotlight on Women Entrepreneurs” (2017).

Women are 50% less likely to get approved for a business loan (SBA Office of Advocacy).

Since female entrepreneurs get less venture capital funding and financing, it’s crucial for them to have an automated marketing system in order to build a successful business.

If you don’t have a revenue engine working for your business, lack of funds can mean the difference between going big and going broke.

By Marketing to Women, You Can Achieve Massive Competitive Advantage By Focusing On the BIGGEST Marketing Opportunity In Today’s Economy: The Multi-Trillion Dollar Women’s Market

The most under-valued and under-served women’s market is also the largest and the most lucrative.

Women are the BIGGEST marketing opportunity in today’s economy. They control about $31.8 trillion in world-wide spending. In the United States, they control $6.4 trillion in consumer spending.

Women control 85% of ALL consumer purchases. For example, they buy more cars, homes, food, computers and electronics as well as insurance and travel services. They make over 80% of healthcare decisions (Yankelovich Monitor, M2W Conference).

Even though women are the most powerful driving force of the global economy, men still drive most business decisions worldwide. ☹

Women occupy only 10% of top management positions in S&P 1500 companies, according to data from Pew Research Center: “Women Scarce At the Top of U.S. Business — and In the Jobs That Lead There” (2018).

Since men own 60% of businesses and they occupy 90% of top management positions in the United States… they control most of the decisions about products and services purchased by women.

If you’re a male entrepreneur, your business can have massive competitive advantage… if you’re willing to improve your understanding of women’s perspectives as well as focus your resources on marketing to women.

It would be smart to hire, promote and nurture women in top management positions.

To get insights about issues affecting women and their buying decisions, it would also be wise to build relationships with female business leaders in your community and worldwide.